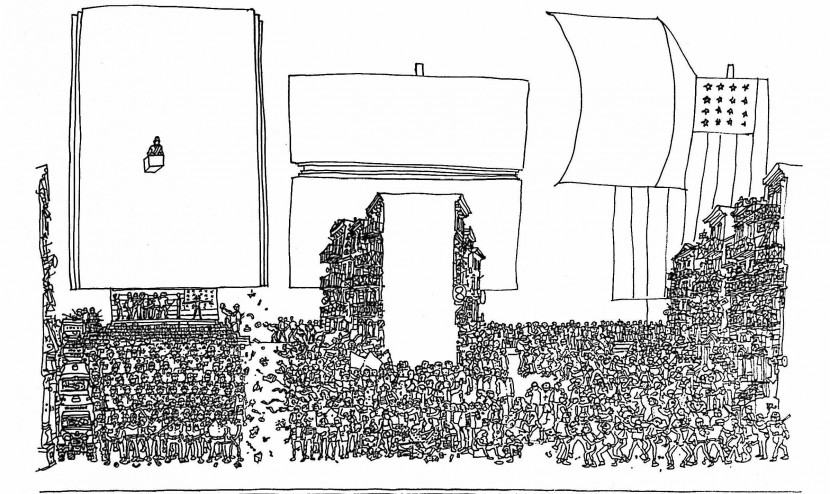 Chicago, August 1968: during the Democratic National Convention for the selection of the party’s presidential candidate, just months after the assassinations of Martin Luther King and Robert Kennedy, thousands of young people came the city to protest the Vietnam War. To contain the circa 10,000 demonstrators, the authorities deployed 21,900 police officers, National Guardsmen, and soldiers. The tumult that followed was watched by the entire country, through the press, radio, and television.

Like millions of Americans, Nivola observed the clashes from a distance and, left deeply disturbed, expressed his personal reactions in a dense series of drawings.

The drawings, which reveal the artist’s emotional involvement, vary from quick sketches to carefully thought-out and composed scenes. The mediation of photography and film is clear in the framing of the works, which portray the most incisive images of the revolt, sometimes quite directly. At the same time, the powerfully expressionistic style deforms the figures, formulating an implicit moral condemnation.

The police officers lose all of their individualism, transformed into depersonalized emblems of blind violence, an effect sometimes underscored by the substitution of their faces with fragments of collage. The demonstrators, on the other hand, are presented as naive flower children with a non-violent approach. The city does not serve as a simple background but as a space defined by buildings that—like enormous sculptures with human features—mark out the horizon and loom over the crowd.

Created during a year of intense political reflection, marked by the completion of the large sculpture Man of Peace for the Mexico Olympics and the start of the project, which then remained unfinished, for a monument to Gramsci in Ales, Sardinia, the Chicago drawings capture the symbolic value of the events, which became fixed in the American conscience as an image of conflict between the idealistic baby boomer generation and the brutal obtuseness of the system.

The climate of ‘68 also spurred Nivola to turn his attention to the political and social situation in Sardinia, where the year closed with protests by shepherds, workers, and students, united against the violence of the State and the inertia of the ruling class. The following year, the anti-military Pratobello uprising against a plan to set up an army base in the Orgosolo countryside marked the peak of the citizens’ non-violent protest. In two posters published by Feltrinelli in 1969, Nivola commented bitterly on state repression and selling off the land for touristic ends. It was a prelude to an even more powerful politicization of his art, which in the 1970s took on features of the separatist movement for Sardinian autonomy.

This immersive exhibition pairs the Chicago drawings and the media images that inspired them with photos, slogans, films, and documents from ‘68 in Orani and Sardinia. Nivola’s two “homelands,” America and Sardinia, while geographically and culturally distant, were, however, united in his eyes by the people’s civic commitment to peace and social justice, against the repression of the State.

A continuity between places and cultures that is also expressed in the exhibition through the original sound project by Carlo Spiga that permeates the space.

The title of the exhibition, What are we fighting for?, is drawn from the lyrics of Country Joe’s Vietnam Song, an anthem of young American antiwar demonstrators in ‘68. It is a question that the exhibition in turn asks its visitors, and before that, the youth of 2018, in a series of interviews of the eighteen-year-old organizers of Orani’s Festival of St. Daniel.

In looking back at the events of ‘68 fifty years on, the museum had two primary aims: to curate the exhibition in a participatory, not hierarchical, way, exploring the potential and limits of a collective democratic process, and to offer the local community an opportunity to create a shared—if conflictual—narrative, filled with the stories and memories of those involved in various ways in the Sardinian movement for civil rights.

The curatorial collective—including, alongside the entire museum staff, a group of young professionals from different fields (Cinzia Melis, Maria Luisa Pinna, Anna Pirisi, Marta Satta, and Debora Tintis) the architect Alessandro Floris and the sound artist Carlo Spiga—worked with the idea of reproducing the creative strategies of a 1968 collective, without the rigid ideological limitations and male chauvinism that often connoted their praxis.

The experiences and memories of Orani residents were gathered through a public history program that will continue after the exhibition ends.

‘I don’t believe that art is the most effective means of improving political situations. I do believe, however, that the artist, like any other citizen, should feel compelled to react, contributing as he can to the attempt to stem the currents of mediocrity and irresponsibility that, when in power, drag society along the road of desolation and suffering.

The Museo Nivola in Orani (Nuoro), located in the middle of a park in the heart of Sardinia, is devoted to the work of Costantino Nivola (Orani, 1911–East Hampton, 1988), an important figure in the international movement for the “synthesis of the arts” (the integration of the visual arts and architecture) who also played a key role in the cultural exchange between Italy and the United States in the second half of the 20th century. The museum has a permanent collection comprising more than 200 sculptures, paintings, and drawings by Nivola and organizes temporary exhibitions focused primarily on the relationship between art, architecture, and the landscape.