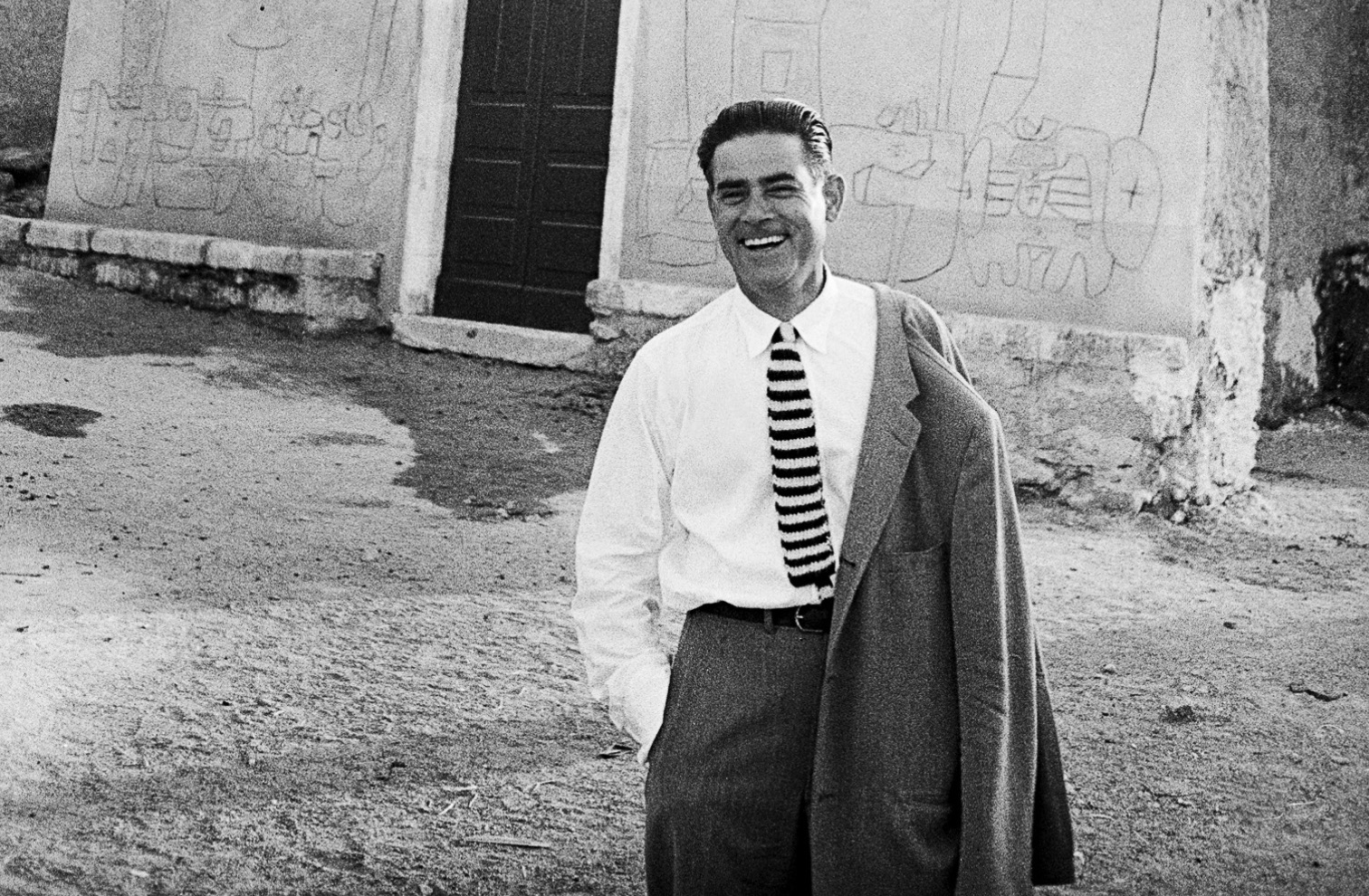 1911 Born in Orani, July 5, the fifth of ten children. Nivola’s father worked as a mason, and after school the young artist worked as an assistant to his father and brothers.

1926 Nivola leaves Orani: the painter Mario Delitala, commissioned to fresco the Aula Magna at the University of Sassari, brings the young artist with him as an apprentice.

1930 Nivola shows a watercolor, The Hill, and two other works at the first Mostra Sindacale in Sassari.

1931 For the Veglione della Stampa at Teatro Verdi in Sassari Nivola creates the space’s decoration and poster. He enters woodcuts in the second Sindacale in Cagliari. Gianni Ticca, an entrepreneur and influential member of the Fascist party, commissions a series of works for his villa at Cala Gonone (Dorgali). Thanks to a modest scholarship from the Consiglio dell’Economia Corporativa of Nuoro, Nivola enrolls in the Istituto Superiore per le Industrie Artistiche in Monza (ISIA). Here he encounters two others Sardinians on scholarship, Salvatore Fancello and Giovanni Pintori, with whom he begins close friendships.

1932 Nivola shows his paintings: Publio Orazio Kills His Sister, Paradise on Earth and three pencil drawings in the third Sindacale of Sassari.

1933 Nivola leaves the Painting and Decoration of ISIA to enter a recently established program in Publicity Graphics. Among his teachers are Edoardo Persico, Marcello Nizzoli, Giuseppe Pagano and Marino Marini. In February he puts on his first one-man show at the Perella Gallery in Sassari. Although he sells nothing during the show, the entire collection is acquired by Ticca for 1,000 lire. During the summer, Nivola paints the frieze Games at the Beach in the Ticca villa. For the fourth Sindacale of Cagliari he prepares woodcuts, drawings and monotypes.

1934 Nivola and Pintori are invited by Pagano to collaborate for the installation of the exhibition of Italian Aeronautics in Milan. During the summer, with Fancello and Pintori, he organizes an exhibition in Nuoro at the bar Deffenu. The three artists, disappointed by the show’s lack of success, decide that it is useless to try to start a career in Sardinia. Nivola is suspended for six months from ISIA for having refused to make the Fascist salute; and Ticca intervenes to save him from being expelled. Upon his return he meets a young German woman of Jewish origin, Ruth Guggenheim, also a student at ISIA.

1935 Nivola graduates from the ISIA and moves from Monza to Milano. He travels to Paris, to visit his cousin Giovanna Bertocchi.

1936 Pagano invites Nivola to work on some wall decorations at the VI Triennale in Milan. Among these are a series of painted panels for the exhibition on Rural Architecture, curated by Pagano and Guarniero Daniel. Thanks to Pagano and to the Guggenheims, personal friends of Adriano Olivetti, the young artist is hired as a graphic designer for the Office of Development and Publicity at the Olivetti company in Milan, directed by Renato Zveteremich. Initially he works on the display boards for the Regional Plan of the Valle d’Aosta. A short time later he convinces Olivetti to hire Pintori as well. He befriends young artists and a group of intellectuals gathering around the poet Vincenzo Cardarelli, including Salvatore Quasimodo, Leonardo Sinisgalli and Alfonso Gatto.

1937 Nivola is appointed artistic director of the graphic section of the Publicity Office at Olivetti. Again through his connection to Pagano, he works on the installation of the Italian Pavilion at the World’s Fair in Paris. His exposure to the pavilion of the Spanish republicans, designed by Josep Lluís Sert and decorated with Picasso’s Guernica, contribute to his growing antifascist feelings. Upon his return to Italy he works with Pagano and Bianchetti on the Mostra del Tessile Nazionale in Rome.

1938 With Fancello and Zveteremich Nivola designs a stand at the Mostra della Montagna in Torino. He also carries out two decorative projects for interiors designed by BBPR in Milano and a large panel for the Olivetti store in the Milan Galleria. Nivola marries Ruth Guggenheim, and they go on honeymoon to Orani. At the end of the year the Sardinian painter Carmelo Floris, on his way to Paris, comes to visit the artist, who gives him addresses of exiles to contact in the French capital. At the end of December Nivola and his wife leave for Basel, where they meet up with her parents, and then proceed to Paris.

1939 In Paris Nivola meets with Italian exiles and antifascists and participates with newspaper of the Giustizia e Libertà movement. Carmelo Floris, upon his return to Italy, is arrested by the fascist police OVRA. Realizing that he too will be arrested, Nivola decides to leave for the United States.

1940 Nivola becomes the art director for Interiors magazine, a job that brings him into contact with many prominent architects and designers who have recently emigrated from Europe, including Gropius, Albers, Breuer, Moholy Nagy. In New York, he is close to the circle of anarchists who produced the publications L’adunata dei Refrattari and Il Martello. He also becomes intimate with the New York artistic scene, befriending De Kooning, Kline, Léger, Pollock, Esteban Vicente, Hedda Sterne.

1942 In New York Nivola meets up again with Saul Steinberg, whom he had known in Milan.

1943 Nivola and Steinberg have a two-man show at the Wakefield Gallery.

1944 Adding to his other commitments, Nivola takes on the art direction of the architecture magazine The New Pencil Points (later Progressive Architecture). His son Pietro is born, followed three years later by Claire. He creates a series of plaster statues as ideal nudes for the exhibition Are Clothes Modern? curated by the architect Bernard Rudofsky at the Museum of Modern Art, New York.

1946 Nivola meets Le Corbusier who shares his studio for four years and will become a life-long friend.

1947 Nivola begins a series of paintings inspired by the post-Cubist teachings of Le Corbusier. Goes to Italy with the idea of finding an apartment in Milan for himself and family, but decides to return to the United States after witnessing the tragic devastation left by the war.

1948-49 Nivola buys a farmhouse on Long Island, at Springs, near East Hampton. Here, playing with his children on the beach, he invents the technique of sandcasting

1950 Nivola has his first show of sculpture at the Tibor de Nagy Gallery in New York and participates at the Quadriennale in Rome. With Bernard Rudofsky he transforms the garden of the house in Springs into a work of environmental art.

1951 Nivola returns to Sardinia as a correspondent for Fortune.

1953 Nivola publishes in Interiors his project for the Pergola Village-Vined Orani.

1954 For the Olivetti showroom on Fifth Avenue in New York by BBPR, he produces a large plaster bas-relief using his sandcasting technique, resulting in an instant international success. He has a one-man show at the Peridot Gallery in New York. He creates the Four Chaplains War Memorial in Falls Church, Virginia. Becomes director of the Design Workshop at Harvard University.

1955 Nivola creates the frieze A Group of Renters for the lobby at Raymond Loewy’s residence on Fifth Avenue, New York. He is included on the first list of artists proposed to decorate the UNESCO building in Paris with Moore, Gabo, Pevsner, Léger, Miró, Arp, Calder, Picasso, Noguchi, Burle-Marx.

1956-57 Has a show in Robinson Hall at the Harvard Graduate School of Design. Executes the large bas-relief for the Mutual Hartford Insurance Company in Hartford, Connecticut, and sculptures for William E. Grady Vocational High School in Brooklyn. Designs a vacation house to build on his property in Springs, which is published in Progressive Architecture. Nivola, with the architect Richard Stein, enters the competition for the monument to the Battle of Batan Corregidor, a project that anticipates Land Art. For the Gagarin House by Breuer in Litchfield, he creates a mural.

1958 In Orani creates a graffito façade for the church of Sa Itria and prepares the tomb for his mother and brother. In the streets of his town he sets up a temporary exhibition of concrete sculptures. For Sert’s house in Cambridge Nivola prepares a mural. Has a one-man show at the Architectural League in New York.

1959 Nivola creates a bas-relief for the Chicago Exposition Center and for the Public School 46 in Brooklyn makes frescoes and sculptures. Produces a mural at Quincy House, Harvard. And has a one-man show in Milan, at the Galleria del Milione.

1960-1961 Eero Saarinen invites Nivola to create a series of sculptures for Morse and Stiles colleges at Yale University. Does murals for the Motorola Building in Chicago and teaches at Columbia University. Has a show at the Bertha Schaefer Gallery, New York.

1962 For his one-man show at the Ariete Gallery in Milan he presents his terra cotta beds. He is sent with a team of experts to study the question of moving the temples and statues of Abu Simbel, Egypt, due to the construction of the Aswan dam.

1963 Sandcast panels for the offices of the Federal Office of Kansas City and mural decorations and sculptures for the Stephen Wise Recreation Area in New York. Has a show of terracotta beds at the Andrew Morris Gallery in New York.

1965- 1966 Enters the competition for the monument to the “Brigata Sassari” in Sassari without success. With Richard Stein designs a piazza for Nuoro, with monoliths and bronze sculptures dedicated to the poet Sebastiano Satta. Creates the façade of the Bridgeport Post Newspaper in Bridgeport.

1967- 1968 Sculptures for the Public School 320 in Brooklyn, and sculptures and graffiti for White Plains Plaza, reliefs and graffiti for the recreation area of the Children’s Psychiatric Hospital in the Bronx, New York. Creates the sculpture to represent Italy at the Olympics in Mexico City and reliefs for the Janesville Gazette in Janesville, Wisconsin. Begins the project for a monument to Antonio Gramsci, that the administration of Ales, birthplace of the philosopher, offers to build (the commission for the monument, however, goes in the end to Gio Pomodoro).

1969-1970 Graffiti at the Division for Employment Security Program in Boston; sculptures for Public School 55 on Staten Island, New York; reliefs and sculptures for the Continental Office Building in Philadelphia. Nivola teaches at the Carpenter Center for the Visual Arts at Harvard University.

1971-1972 Two sculptures for the Criminal and Family Court in the Bronx; a relief for the Legislative Building in Albany, New York; mural for Public School 17, Queens on Long Island.

1978-1980 Teaches at the School of Architecture at University of California at Berkeley where he holds a one-man show, the same year showing at the Galleria d’Arte Duchamp in Cagliari drawings, sculptures and ceramics made in collaboration with the potter Luigi Nioi.

1981-1982 Designs sculptures for the offices of Mobil Oil in Washington, D.C. Teaches at the Royal Academy of Fine Arts in the Hague, Holland.

1983-1984 One-man shows at the Carpenter Center at Harvard and the Washburn Gallery in New York.

1986-1987 Nivola begins work on sculptures for the Regional Council of Sardinia in Cagliari. Puts on a show of his last sculptures at San Quirico d’Orcia, in Tuscany.

The Catalogue Raisonné of the artworks by Costantino Nivola is a developing project under the scientific direction of Prof. Giuliana Altea and Dr. Antonella Camarda. Collectors are invited to share with us images and information on the works in their possession, writing to info@museonivola.it. Under request, the Nivola Foundation also offer an authentication service.

The Archives are open to academics, students and independent scholars, exclusively on request and appointment. The archive includes a specialized library and several archival funds on Costantino Nivola. Particularly interesting is the picture library, fully digitized, documenting Nivola’s life and career. The Foundation reserves the right to grant or deny the access to the Archives. For info and appointments please write to: info@museonivola.it.