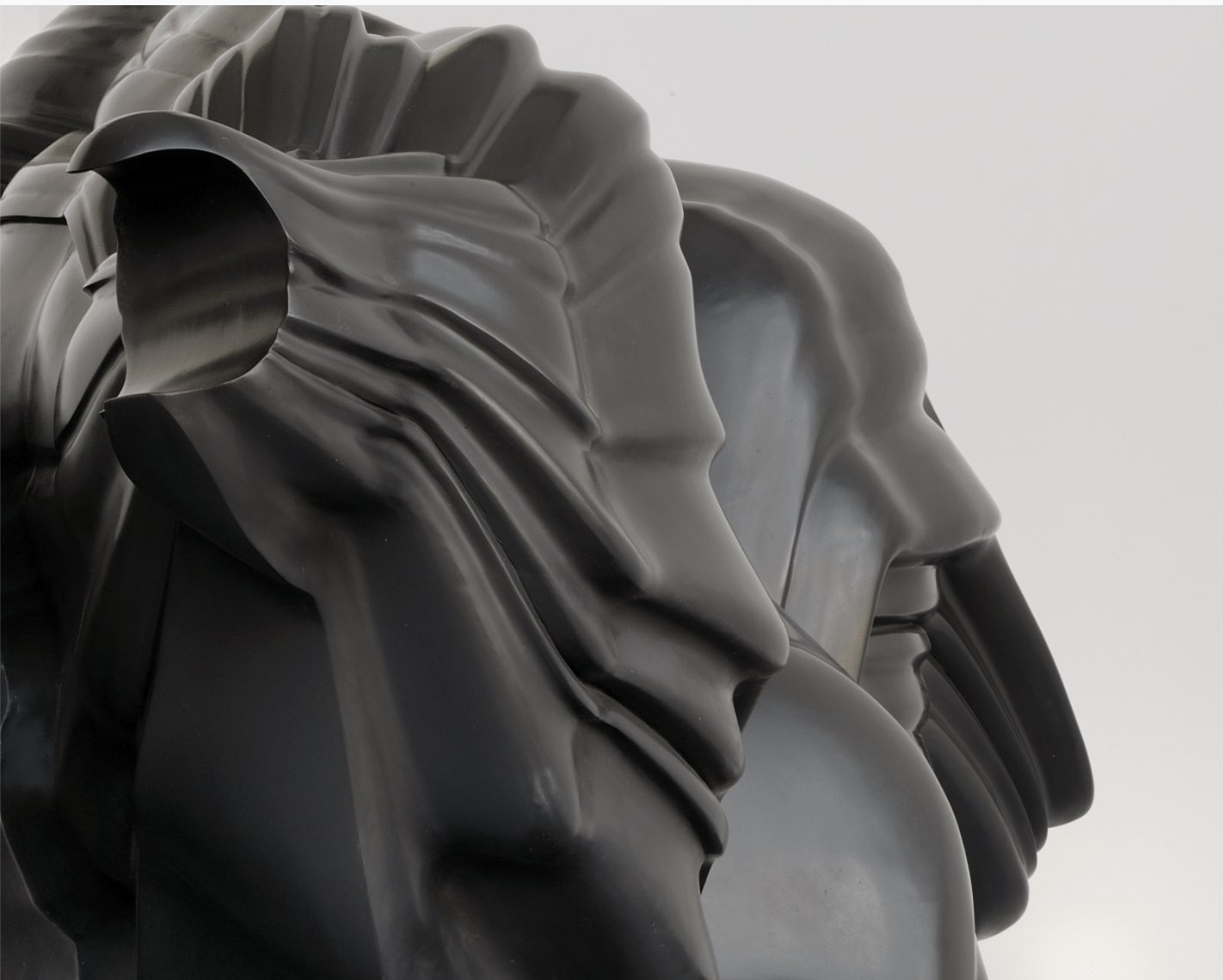 The Museo Nivola is pleased to present the exhibition Tony Cragg. Endless Form, which brings the work of one of the greatest contemporary sculptors to Sardinia for the first time.
With this project, the museum, by using the legacy of Costantino Nivola as its starting point, is continuing its exploration of sculpture as a tool for the investigation of space, comparison of form and materials, and as an artistic practice that can have a real impact on today’s culture and social dynamics.

In a space flooded with light, Cragg’s monumental sculptures are in dialogue with each other, the architectural context, and the landscape that can be glimpsed through the arches of the large windows.
Its volumes are at once both imposing and light, and as a result the works take firm possession of the space, without seeming static. On the contrary, they seem to be in a state of constant flux, following the inclination of the rays of light and the movements of the viewer around them.

They are dynamic objects bearing the traces of the processes that created them, processes that first begin with drawings that are often figurative, and in encountering the material are guided by its internal force. As the artist has stated, “Even if it’s nothing linear, things generate something. There is a kind of self-propagating, self-generating energy within the material itself.”

Some of the works seem to be the result of rotating movements, while others reveal the fruits of accumulation, and others still the product of cutting and twisting the material. Some develop vertically, in an apparent challenge to gravity (such as the wooden columns of Pair, 2015 and the slim steel spiral of Zimt, 2014), while others offer the eye an abundance of recesses and multiplications (Caught Dreaming, 2006) or form structures that can be permeated by the light and atmosphere (Hedge, 2008).

With an interactive capacity that makes them the heirs of Futurist dynamism and presentational Minimalism, Cragg’s works appeal not only visually but also in terms of movement and a tactile sense of visual hapticity. Hence they are cinaesthetic objects with surfaces that invite touch and forms that engage visitors physically, guiding their movement through the space.

In general terms we tend to think of sculpture as pure form, mass, and volume. In Cragg’s work, however, the quality of the surface facture, its texture and hue are equally important. Variations in finish make similar forms seem totally different, rendering the skin of the sculpture warm or cool, smooth or rough, glossy or matte.

Like the luster of a 1950s Buick or rusty like the hull of a decommissioned ship, Cragg’s works combine associations with the machine aesthetic and clear references to nature. His sculptures seem to obey natural laws that govern living organisms, one evolving from the other, and growing out of themselves. Varied and changeable, in contrast to the repetition of industrial objects, they react and evolve in contact with the surrounding environment.

Tony Cragg (Liverpool 1949) is among the world’s greatest contemporary sculptors, known for his tireless experimentation with forms and materials. Trained at the Wimbledon School of Art and the Royal College of Art in London, he has lived in Wuppertal, Germany since 1977. In the early 1980s, he gradually shifted his focus from installation to sculpture as an independent object. In 1982 and 1987, he showed his work at Documenta 7 and 8 in Kassel and, in 1988, represented Great Britain at the Venice Biennale, winning the prestigious Turner Prize that same year. Made a Chevalier des Arts Lettres in 1992, elected a member of the Royal Academy in 1994, and awarded the Praemium Imperiale for sculpture by the Japan Art Association in 2007, Cragg was more recently appointed a Fellow of the University of the Arts in London (2012), awarded the Artist’s Medal of Honor of the Hermitage, Russia (2012), and awarded the Order of Merit of the Federal Republic of Germany (2012). In 2016, he received a Knighthood from Queen Elizabeth II. From 2006 to 2014, he was the Rector of the Kunstakademie in Düsseldorf, among the most prestigious of art schools in Germany.

Cragg also set up the Cragg Foundation, a not-for-profit organization dedicated to displaying, teaching, and promoting sculpture at the Waldfrieden Sculpture Park in Wuppertal.
He has displayed his work in the world’s most important museums and, in recent years, has developed the relationship with public space. Five of his monumental sculptures are currently on view along Park Avenue in New York as part of the NYC Parks Art in the Parks program.

The Museo Nivola in Orani (Nuoro), located in the middle of a park in the heart of Sardinia, is devoted to the work of Costantino Nivola (Orani, 1911–East Hampton, 1988), an important international figure who was committed to the “synthesis of the arts” (the integration of the visual arts and architecture) and played a critical role in the cultural exchange between Italy and the United States in the second half of the 20th century. The museum’s permanent collection comprises more than 200 sculptures, paintings, and drawings by Nivola and organizes temporary exhibitions focused primarily on the relationship between art, architecture, and landscape.