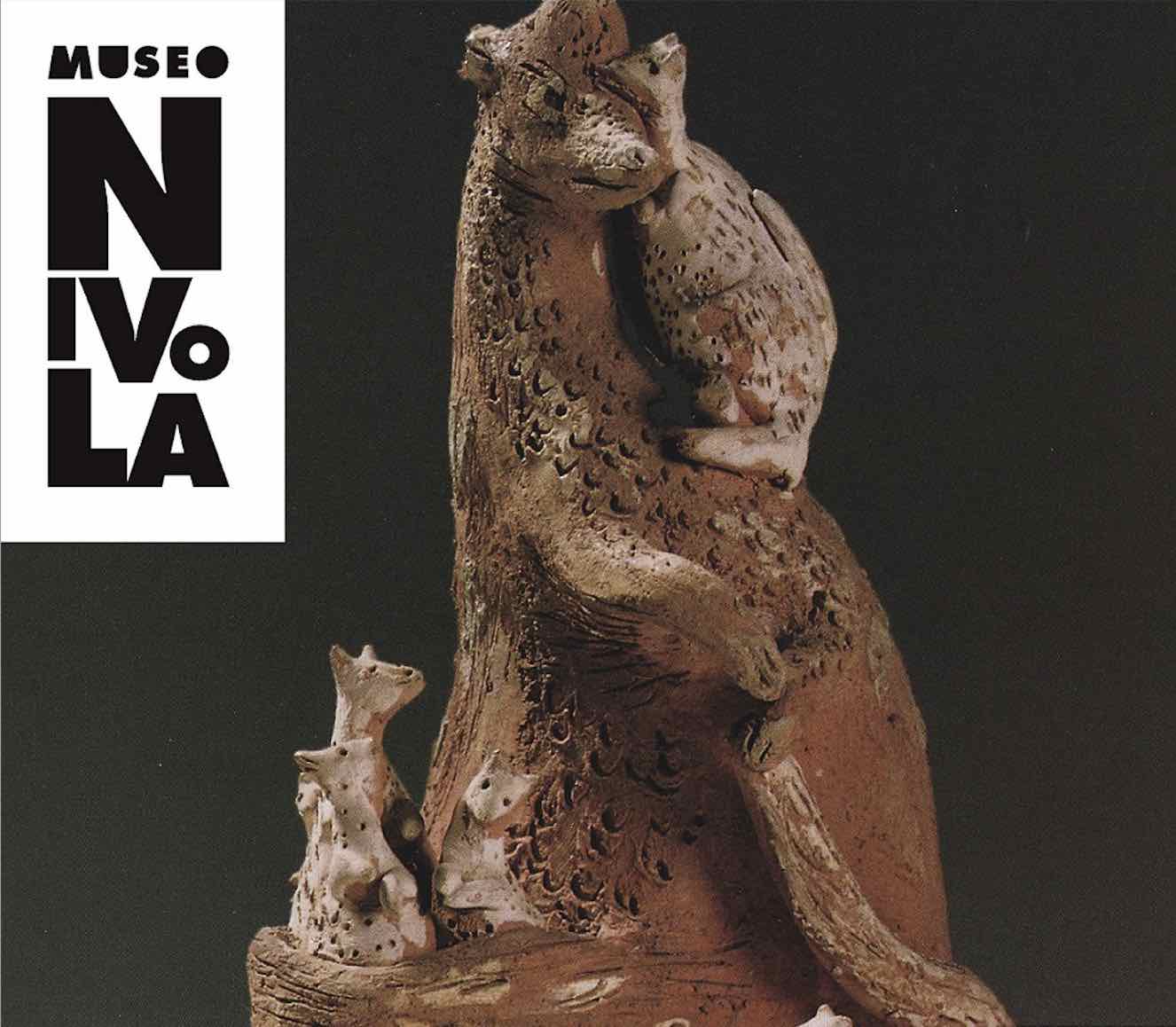 In 2016, centenary of the birth of Salvatore Fancello (Dorgali, Nuoro 1916 – Bregu Rapit, Albania, 1941), several exhibitions have been organized to remember the brilliant ceramist and draughtsman who, despite his short life, left an indelible mark on XX century Italian art.

The Nivola Museum, devoted to the artist that more than any other was close to Fancello, his fraternal friend and schoolmate Costantino Nivola, could not miss the chance to join the celebrations, by tracing back Fancello’s route from the training years at the Istituto Superiore per le Industrie Artistiche of Monza (ISIA) to his premature death on the Albanian war front. Nivola would have always remembered dearly his friend, to the point of including in his last public work, the decoration of the Regional Council Building in Cagliari, a graffito reproducing a Fancello’s drawing.

The exhibition pays homage to their friendship.

The ideal fulcrum of the show is the monumental panel with allegorical scenes painted together by Nivola and Fancello in 1937, a work symbolic of the close friendship and the artistic partnership between the two.

In the painting, showing the authors’ interest for the École de Paris and Surrealism, the connection between the two artists is so complete, it is almost impossible to distinguish each intervention.

The story of Fancello was written inside the circle of artists and architects related to the Triennials, the editorial board of Casabella and the Olivetti Publicity Office, in the climate of idealistic tension and criticism against the Fascist regime common in the Milanese rationalist movement. His work, of surprising originality and formal quality, takes after the teachings on simplicity, honesty and freedom by Edoardo Persico and Giuseppe Pagano. The two architects were the protagonists of the most advanced Italian culture and committed – through the pages of Casabella, the magazine they directed – to the modern movement against the regime’s monumentality and rhetoric.

The design of the exhibition in Orani, by Alessandro Floris, recalls this cultural context, reviving the typical grid scheme of the Milanese rationalist architectures of the Thirties. Ceramics, drawings, pictures and texts are embedded in a structure of planes and orthogonal struts inspired by the famous exhibitions of the interwar Triennials, by designers such as Persico, Albini and BBPR.

The exhibition – hosted in the first museum pavilion, the former wash house of Orani, at the meaningful presence of one of the marble Great Mothers by Nivola – is divided in three sections: The Sign and the Matter, Metamorphosis and The Restless Form. Considered the short time span in which Fancello’s career developed (11 years from 1930, year in which he entered the ISIA, to his death in 1941, and even less if school and military service are excluded), the sections follow an overall chronological order, nonetheless refusing to be rigid in the account of the artist’s path, rather highlighting the progressive emergence of various elements and solutions.

The Sign and the Matter witnesses through terracottas and sketches for ceramic pieces the formative years of Fancello in the classrooms of the ISIA, under the technical guidance of artists such as Ugo Zovetti and Umberto Zimelli and in the light of the teachings of Persico and Pagano.

Metamorphosis focuses on a side of Fancello’s activity which fully emerges just after the conclusion of his traineeship: his tendency in let forms and figures trespass one into each other, creating fantastic images, hybrids between the animal, vegetal and mineral realms.

The Restless Form is centred on the final steps of the artist’s evolution, in 1938 in Albissola, in Tullio Mazzotti’s ceramic workshop, in contact with another artist who used ceramic in the most innovative way, Lucio Fontana. In this phase, blurred and fermented surfaces, the dynamism of the composition, the frequent use of metallic lusters that seem to destroy the form in a game of reflections, create visionary images, of powerful originality, the climax of a path doomed to be tragically broken shortly after.

Fancello’s existential tension and the neo-romantic fervor explored in the show are the counterpart to the neoclassicism which characterizes the other concurrent exhibition at the Nivola Museum The Daily Myth. Italian XX Century Art from the Tilocca Collection. By putting the two exhibitions side by side the Nivola Museum shows two diverse and complementary tendencies of XX century Italian culture: classical and romantic, closed and open form, stillness and dynamism, fascination with myth and experience of the mundane.