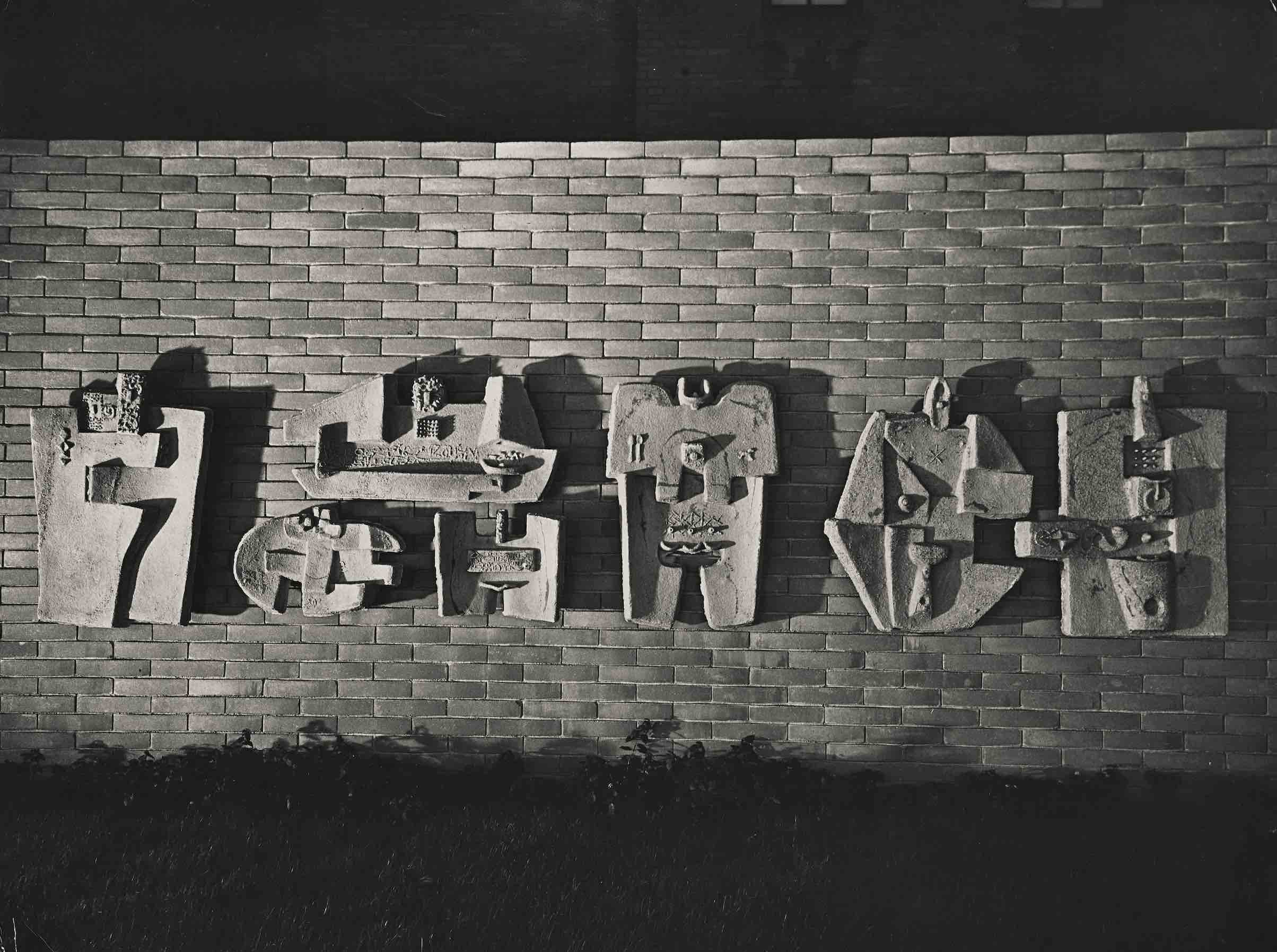 Exhibition Showcases Artist Costantino Nivola’s Impact on New York’s Built Environment Nivola in New York I Figure in Field is on View January 23 through March 15, 2020 at The Cooper Union

Cooper Square, NY—The Irwin S. Chanin School of Architecture at The Cooper Union for the Advancement of Science and Art, the Fondazione Costantino Nivola, and the Italian Cultural Institute of New York present Nivola in New York I Figure in Field, an exhibition of the work of Italian sculptor Costantino Nivola (1911-1988), known for his large-scale bas-reliefs, murals, and free-standing sculptural installations created in collaboration with architects. On view January 23 through March 15 in the Arthur A. Houghton Jr. Gallery, the exhibition is the first-ever to tell the story of Nivola’s built New York City projects through maquettes and sculptures, original drawings, site-specific photographs, and related ephemera. The exhibition also features a timeline outlining 62 projects that Nivola made in collaboration with architects over approximately 40 years. In addition to the exhibition, The Cooper Union will present a variety of related programming (dates to follow), including a panel on the role of public art, as well as off-site educational workshops and tours of Nivola’s work throughout the city.

New York is home to the largest gathering of Nivola’s public artworks — 21 pieces across all five boroughs, at least 17 of which still exist. A free pocket guide will be produced for Nivola in New York: Figure in Field to encourage visitors to learn more about all of these works and see them in situ.

“A disciple of Le Corbusier, Nivola believed in the synthesis of the arts, the collaboration between the artist and the architect,” says Giuliana Altea, president of the Fondazione Costantino Nivola. “After the success of his great wall relief for the Olivetti showroom in New York, in 1954, he achieved an international reputation as a ‘sculptor for architects’ and started working with important figures as Josep Lluís Sert, Marcel Breuer, and Eero Saarinen.”

“Nivola championed the idea that art should be accessible to everyone, which is why much of his work was created specifically for public and municipal spaces,” says Antonella Camarda, Director of Museo Nivola. “In fact, 15 of his metro New York projects were commissioned for New York City schools, highlighting the importance that Nivola placed on making his work for the community and in art’s role within civic life.”

Born in Sardinia, Nivola was already a practicing artist in Italy before fleeing fascism with his Jewish wife and ultimately settling in New York in 1939. Eventually he and his family moved

to Long Island, where he discovered and perfected his unique cement carving process and sandcasting that included reverse sculpting molds in wet sand and filling them with plaster and concrete. These processes allowed him to work with the materials often shared by the buildings he embellished.

“Both through his methodology and material choices, Costantino Nivola exemplifies how artists’ and architects’ practices are inexorably combined, and through his partnerships with numerous prominent architects of his time Nivola’s legacy in the city cannot be measured,” says Nader Tehrani, Dean of Cooper’s The Irwin S. Chanin School of Architecture. “To this end, this exhibition is a unique opportunity to shed light on a mid-20th century master and how his creative process changed our city’s landscape.”

The gallery exhibition highlights four of these projects, starting with Nivola’s first public commission for the Olivetti showroom, the Apple store of its time. For the Fifth Avenue store’s showroom’s interior, he created a 15-foot-high by 76-foot-long wall relief in 1953. After the showroom closed in 1970 the relief was eventually moved to Harvard University’s Science Center. Next is another of Nivola’s early New York projects, a 1953 sandcast bas- relief cartouche on the south façade of Coney Island’s William E. Grady High School. The third featured work is the Stephen Wise Recreation Area — a public plaza created in 1962 between two housing blocks on the Upper West Side that includes a fountain, a group of cast-concrete horse sculptures, a bas relief, and a sgraffito mural that define specific areas for play and relaxation. The final work on view is Nivola’s last sculptural commission completed in the United States: a series of bronze statuettes and plaques he created in 1984 at the 19th Precinct Combined Police and Fire Facilities on the Upper East Side to document police and fire activities.

This exhibition is co-curated by Steven Hillyer, Director, The Irwin S. Chanin School of Architecture Archive at The Cooper Union and Roger Broome, a Brooklyn-based architect and alumnus of the school, with scientific advice from Giuliana Altea and Antonella Camarda.

Nivola in New York: Figure in Field Presented by The Irwin S. Chanin School of Architecture of The Cooper Union, the Fondazione Costantino Nivola, and the Italian Cultural Institute of New York

Presented by The Irwin S. Chanin School of Architecture of The Cooper Union, the Fondazione Costantino Nivola, and the Italian Cultural Institute of New York

ABOUT THE COOPER UNION
The Cooper Union for the Advancement of Science and Art is a distinguished, private college of art, architecture, and engineering with a world-class faculty of humanities and social sciences. Founded in 1859 by inventor, industrialist, and philanthropist Peter Cooper, the college is dedicated to his radical commitment to diversity and his founding vision that fair access to an inspiring free education and forums for courageous public discourse foster a just and thriving world. With a student body of more than 900 undergraduate and graduate students, The Cooper Union’s curriculum focuses on helping students acquire technical mastery and entrepreneurial skills, enrich their intellects and spark their creativity, and become inspired to address the critical challenges and opportunities of their time. The institution provides close contact with a distinguished, creative faculty and fosters rigorous, humanistic learning that is enhanced by the process of design and augmented by its urban setting in New York’s East Village. For more information, visit http://www.cooper.edu.

ABOUT THE FONDAZIONE COSTANTINO NIVOLA
The Fondazione Costantino Nivola promotes the awareness of the works and message of Costantino Nivola as well as sustaining contemporary art in general through exhibitions, research, and cultural activities with the goal of improving local and regional cultural and economic possibilities. The Foundation is responsible for the Nivola Museum and its park; organizes exhibitions, conventions, awards; and makes connections with cultural institutions in Sardinia, Italy, and abroad. The Foundation’s holdings include the site and buildings of the Museum and the Nivola works in its collection. For more information, visit https://www.museonivola.it/en/.

ABOUT THE ITALIAN CULTURAL INSTITUTE OF NEW YORK Founded in 1961, the Italian Cultural Institute of New York is an office of the Italian government devoted to the promotion of Italian language and culture in the United States. As part of the Ministry of Foreign Affairs’ global policy, the Institute is committed to the understanding and enjoyment of Italian culture through such initiatives as the organization of cultural events, the dissemination of Italian language, and the fostering of relationships with American institutions. Not only an incomparable “open window” on the cultural and social aspects of past and present Italy, the Institute has become an ideal meeting point for intellectual and artistic dialogue.