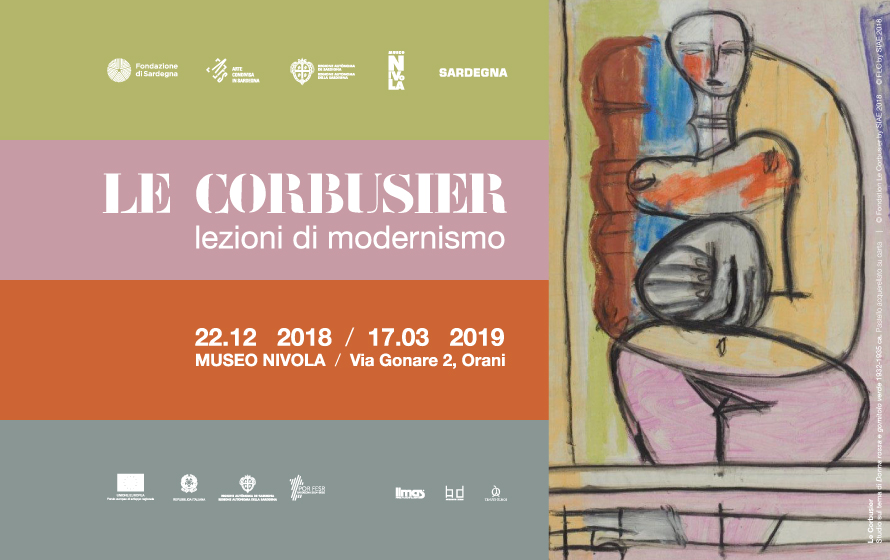 For the first time in Italy, the extraordinary drawings by Le Corbusier formerly in the Nivola collection, thanks to a project by the Fondazione di Sardegna and the Fondazione Nivola in the context of “AR/S – Arte condivisa in Sardegna.”

Le Corbusier was not only the greatest architect of the twentieth century, he was also an exceptional visual artist who, starting from the geometries of his Purist period (from 1918 to the second half of the 1920s), developed, through contact with the Surrealist milieu and the lesson of Picasso and Léger, a highly potent and evocative synthetic language. At the base of his work as a painter stands an extremely rich and still little known body of graphic works, within which the collection of drawings preserved by Nivola has special significance.

From a corpus of more than 300 works, the sixty-four selected for this exhibition reunite for the first time the segments of the collection now divided between Europe and America. The fruit of a joint project between the Fondazione di Sardegna and the Fondazione Nivola in the context of the series “AR/S – Arte condivisa in Sardegna,” with support from the Department of Tourism, Craft, and Commerce of the Region of Sardinia, and thanks to the important collaboration of the Fondation Le Corbusier, this exhibition explores the creative world of the master of modernism and sheds light on a part of his life—his relationship with Nivola—that had a rich influence on various aspects of his work.

In 1946, Le Corbusier, in New York as part of an international team of architects commissioned to design the United Nations building, met Costantino Nivola and began a friendship that, cultivated through various trips to the United States and later through written correspondence and occasional trips by Nivola to Paris, lasted his entire life. The younger artist’s studio in Greenwich Village and his home on Long Island, where Le Corbusier was often a guest, provided welcome refuge from the tensions of his work with the United Nations team.

Le Corbusier’s teaching had a determinant influence on Nivola, drawing him close to modernism, abandoning his previous expressionistic style. For Nivola, the drawings that the architect brought with him from Paris and made in America were a vademecum of ideas and formal solutions, but most importantly an example of design rigor and creative freedom. Through those sheets, Nivola later recalled, he learned “the rules of the game, the most beautiful game that man ever invented, the game of art.”

The Game of Form

The exhibition opens with drawings and studies from the Purist phase, when the young Le Corbusier worked out a simple, rigorous graphic system based on the geometrization of a repertoire of everyday objects. The theme of the still life was a starting point for an analysis in which forms, like words in a lexicon, became elements of a visual grammar. Many years later, in New York, Le Corbusier used the “still life” of Nivola’s dining table as a tool for teaching how to see. The large Study on the “Coffee Pots” theme, with the dual date “New York 1927–1947,” reconnects these two moments.

The Metamorphoses of the Figure

The human figure, absent in the Purist period, appears in Le Corbusier’s work at the end of the 1920s. Through the drawings presented in this section, visitors can follow the transformations of the human presence in his work from the early balanced, harmonious geometries to the aggressive, disturbing forms of the early 1940s. The faces and bodies shift from recognizable likenesses to radical stylization and then violent, almost monstrous deformations. The theme of the half-bust figure, first explored as early as the late 1920s, was developed over the subsequent decades in various series, like those of the Female Athlete and the Guardian Angel of Sens Cathedral.

The female nude is omnipresent in 20th-century art, as much in its traditional form as in the avant-garde. Le Corbusier was no exception: quite the opposite, for him, woman was a true obsession, the image of the “other” in relation to which to construct one’s own identity. It is no wonder that the theme emerges with force in his painting after his trip to Algiers in 1931. His gaze—connoted by the most classical “Orientalist” attitude—at once both distanced and mythicized. His women, powerful and voluptuous, are both emanations of the sacredness of nature and bodies serving as the object of male desire.

The theme of the “woman with a candle,” which Le Corbusier also called “Icon,” occupies a place all its own in the collection. The series of drawings, produced in New York, was made in preparation for a group of paintings with the same title, standing out among which is the fine canvas of 1946 which also belonged to Nivola and recently came up for auction at Sotheby’s. The majestic figure female is a portrait of Le Corbusier’s wife, Yvonne Gallis, the most important woman in his life. Le Corbusier depicted her with a lit candle, symbol of the domestic hearth, of which she was keeper, but also an allusion to her sexual power.

In September 1950, Le Corbusier, once again Nivola’s house guest, made a mural on two contiguous walls in his home on Long Island. His interest in mural painting first emerged in the late 1930s, and the Springs paintings condense some of the themes typical of his work during the war years. Starting from found objects like pebbles and bones (“objects of poetic reaction”), Le Corbusier had developed Surrealist images in sculpture and painting with the titles Ozon (from the town in the Pyrenees where he took refuge during the Nazi occupation of Paris), Ubu, and Panurge (from characters in works by Alfred Jarry and François Rabelais). This section focuses on preparatory drawings for the mural and others linked to its themes.

In 1951, on the Long Island beach, Le Corbusier experimented with Nivola’s technique of sandcasting (plaster cast made from a sand mold), creating a few sculptures. This experience is represented in the exhibition by two bronzes taken from now-lost sandcasts, one of which depicts the Main ouverte, open hand, a symbol of peace, prosperity, and community. The discovery of sandcasting contributed to Le Corbusier’s maturation of a new conception of cement surfaces and the relationship between sculpture and architecture, later expressed in his buildings from the 1950s.

With Le Corbusier. Lessons in Modernism, the Fondazione di Sardegna and the Museo Nivola are celebrating the critical encounter of Nivola’s life as an artist and, at the same time, offering visitors an important and still little-known aspect of the work of Le Corbusier, one of the giants of twentieth-century architecture and art.

The Museo Nivola in Orani (Nuoro), located in the middle of a park in the heart of Sardinia, is devoted to the work of Costantino Nivola (Orani, 1911–East Hampton, 1988), an important figure in the international movement for the “synthesis of the arts” (the integration of the visual arts and architecture) who also played a key role in the cultural exchange between Italy and the United States in the second half of the 20th century. The museum has a permanent collection comprising more than 200 sculptures, paintings, and drawings by Nivola and organizes temporary exhibitions focused primarily on the relationship between art, architecture, and landscape.

The Fondazione di Sardegna, founded to promote the socio-economic development of Sardinia, carries out important activity in the culture sphere, supporting local initiatives and promoting Sardinian culture worldwide. In the area of art, it preserves and adds to its own collection, open to the public at its two locations in Cagliari and Sassari, and advances the project AR/S- Arte condivsa in Sardegna, developed starting from the valorization of its own artistic patrimony, with exhibitions carried out in collaboration with Sardinia’s leading museums.

Department of Tourism, Craft, and Commerce of the Autonomous Region of Sardinia