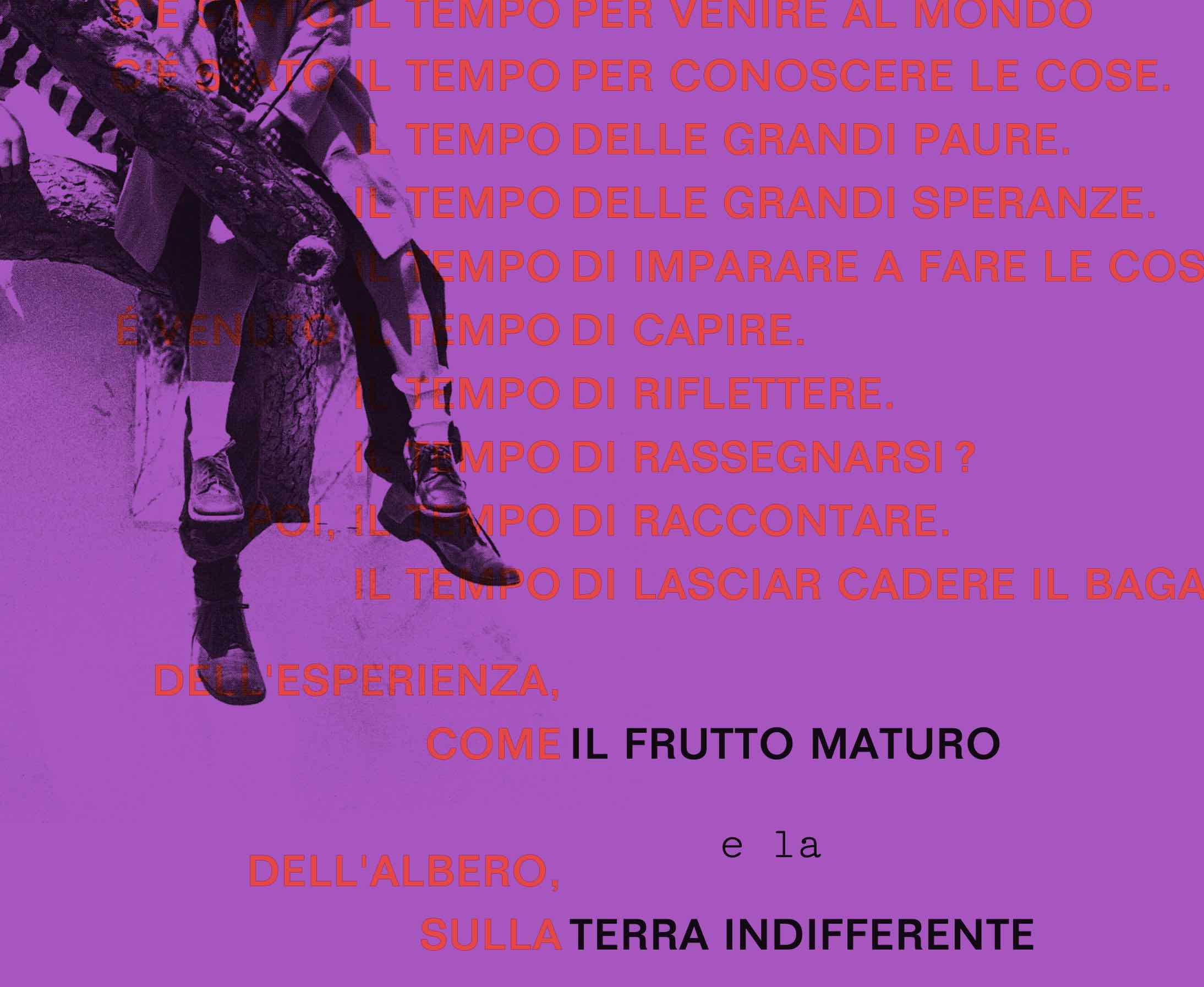 An exhibition curated by
Lore Gablier

Exhibition from 30 May to 31 August 2015
Opening on Friday 29 May at 6pm
For the opening, French filmmaker Xavier Quérel will present his solo performance, Quelques minutes de soleil après minuit

Il frutto maturo e la terra indifferente is the first in a series of exhibitions inaugurated this year by the Nivola Museum in Orani. Opened in 1995, the museum is devoted to the art of Costantino Nivola (Orani 1911- East Hampton 1988), a prominent figure, beginning in the 1950s, in the international dialogue between sculpture and architecture. The new exhibition program, initiated by Giuliana Altea and Antonella Camarda, aims to explore, in a contemporary art perspective, the issues that informed Nivola’s work: the relation of sculpture with the public sphere; participation; the utopian idea of community; and the active role of the artist in society.

The exhibition Il frutto maturo e la terra indifferente brings together seven international artists who, through their work, resist our habitual perceptions and assumptions. Drawing inspiration from a poem by Costantino Nivola, it celebrates uncertainty and playfulness.

“Being affected is learning to listen, taking things in and transforming oneself, breaking something of oneself and recomposing oneself with new alliances.”
– Marina Garcès, “Honesty with the Real”

In January 1988, several months before he died, Italian artist Costantino Nivola wrote a poem which evokes the book of Ecclesiastes and its well-known description of the cycles of human life. The poem ends, as expected, with life’s end, or in Nivola’s words with “The time to drop one’s baggage of experience/Like the ripe fruit from a tree that/ Falls on the indifferent earth.” Nivola’s choice of metaphor for life’s maturation, alludes to a story that he would tell throughout his life of a poor boy standing outside a rich man’s orchard, waiting for a few fruits to fall this side of the orchard’s fence. Nivola was, of course, telling his own story: a mason’s son from provincial Sardinia striving to garner a little fruit from – if not join – modernism’s Elysium.

There is, however, another way to apprehend Nivola’s concluding verse. And this would imply returning to Martin Heidegger’s understanding of the world and the earth, as he elaborates it in his essay, “The Origin of the Work of Art.” For the German philosopher, the world should not be reduced to a mere objective totality, nor to an empirical framework. Rather, the world, as Heidegger describes it, is a coming together of elements that proffer meaning, and therefore refers to a set of relations that we create, inhabit, and share. It is only, for instance, in coming together in a certain arrangement that stones begin to be perceived as a wall. Yet, in order to stand, the wall – as part of a world or as a world in its own right – grounds itself on the earth. The earth is therefore that which both occasions and sustains the world and its meaningfulness. But the earth also resists, indeed perforates, the world it makes possible: as such, it allows for a richness of meaning that will never be exhausted. Therefore, as Heidegger concludes, between the world (which strives to enclose itself in meaning) and the earth (which tirelessly resists it) there is a strife: a strife that is not to be resolved, at the risk of exhausting both world and earth. This is both the origin and task of art: in acknowledging the strife, art offers to draw upon an alterity that cannot be fully appropriated, mastered, or manipulated.

In the garden of his house in Long Island, Costantino Nivola installed in 1950 a free-standing wall into which he cut an aperture allowing a tree to jutt through it. The wall, which does not merely enclose or delimit but also serves as an opening, provides a striking example of Heidegger’s understanding of art – one that freely acknowledges the strife of world and earth. In Nivola’s garden, the ripe fruit is thus no longer the mere coveted object of Nivola’s story, to be consumed or, to quote Heidegger, “exhausted.” Rather the fruit returns to the earth and enriches a ground upon which other works and worlds can henceforth stand. Here, the fruit serves as a metaphor for the maturity of a world in which the strife of creating unburdens itself.

Drawing inspiration from a poem by Costantino Nivola, the exhibition “Il frutto maturo e la terra indifferent” celebrates uncertainty and playfulness as opposed to contentment, from the Latin word “contentum” or content – literally a thing contained. The first exhibition of a program initiated this year by the Museo Nivola, “Il frutto maturo e la terra indifferente” pays homage to seven international artists who, through their work, challenge the way we construct meaning and perceive the world. By operations such as cutting, boring, layering, and scratching, Iván Argote, Jordi Colomer, Loreto Martínez Troncoso, Jean-Luc Moulène, Xavier Quérel, Bojan Šarcevic and Éric Stephany remind us of this alone: that we can never be content with meaning, for it must be constantly shared and reshaped, in the form of a plurality of worlds that pay respect to the earth’s indifference.

Xavier Quérel
Born in France in 1966, Xavier Quérel lives and works in Grenoble, where he co-founded the collective Cellule d’Intervention METAMKINE (http://metamkine.free.fr), and the MTK studio, a collective laboratory for experimental and expanded cinema.

Loreto Martínez Troncoso
Born in Vigo in 1978, Loreto Martínez Troncoso studied art at the Facultad de Bellas Artes, Universidad de Vigo and in the Fine art school in Bordeaux and Lyon. She has presented her work in solo exhibitions at the Galeria PM8 in Vigo (2013 and 2015), the Centre d’art contemporain de la Ferme du Buisson, Noisiel (2013), the Marco in Vigo (2011), and performed in numerous venues and festivals.

Jean-Luc Moulène
Born in Reims, France, in 1955, Jean-luc Moulène studied aesthetics and sciences of art at the Sorbonne University in Paris. He has participated in numerous international group exhibitions including Documenta X (1997), the Sao Paulo Biennial (2002), the Venice Biennial (2003), the Taipei Biennial (2004) and most recently the First International Biennial of the Image, Luang Prabang, Laos (2007) and the Sharjah Biennial (2010). His has notably exhibited as a solo artist at the DIA:Beacon, Culturgest in Lisbon, Centre d’Art Contemporain in Geneva, Center for Contemporary Art in Kitakyushu, Musée du Louvre in Paris, and the Carré d’art-Musée d’art contemporain in Nîmes.

Bojan Sarčević
Born in 1974 in Belgrade, Bojan Šarčević studied art in Paris and Amsterdam. Since his participation in Manifesta 2 in 1998, he has been featured in numerous international group shows, including the 50th Venice Biennial in 2003 and the 3rd Berlin Biennial in 2004. His work has been presented in solo exhibitions at the Kunstverein Munich and Kunstverein Heilbronn, the Bawag Foundation in Vienna, the Crédac in Ivry-sur-Seine, the MAMBO in Bologna, the Kunstverein Hamburg; De Vleeshal, Middleburg; Le Grand Café in Saint-Nazaire, Leopold-Hoesch-Museum in Düren, the Institut d’art contemporain in Villeurbanne, the Kunstmuseum in Liechtenstein.
www.bojansarcevic.net

Éric Stephany
Born in France in 1970, Éric Stephany studied Architecture at the École d’Architecture de Paris La Villette, and Art History at the Université Paris IV. His work has been presented in numerous group shows, notably at the Fondation d’entreprise Ricard, Paris, at Meetfactory in Prague, La Quincaillerie Vander Eycken in Brussels, Galeries Nathalie Obadia and Hussenot in Paris, at the French Institute in Berlin and ISCP in New York.
http://ericstephany.com