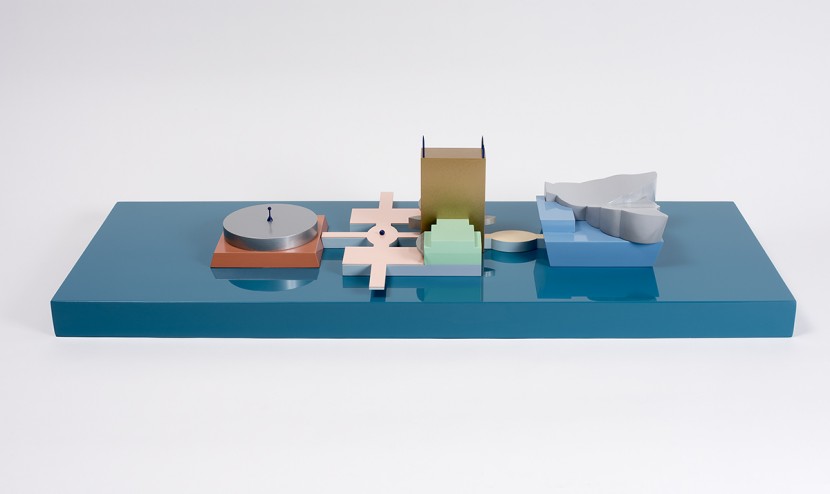 “This is our heresy: the structure of architecture resolves itself in the facade, the function of the object finds its fulfillment in the decorative narration of the surface, everything is the drawing or the sculpture of itself: designing is painting.”

This is how Alessandro Mendini in 1994 summarized the philosophy of Atelier Mendini, an extraordinary workshop which, under the guidance of himself and his brother Francesco, started a new way of doing architecture, art and design beyond any disciplinary boundary.

The Museo Nivola, paying homage to Alessandro Mendini after three months from his passing, presents the outcome of fifty years of architectural planning: all Atelier Mendini’s public and private architectures, shown by 25 extraordinary accurate wooden maquettes of 25 buildings, together with a related series of drawings.

In the exhibition, produced by Abet Laminati, the most famous buildings by the Atelier come alive in a miniaturized, Gulliverian scale, as toy-sculptures: from the visionary Groningen Museum in Holland (1989-1994) to the Tower of Paradise in Hiroshima, Japan, to the most recent projects in South Korea.

The Mendinian architecture is post-modern and neo-constructivist, colorful and joyful. It subverts the relationship between structure and decoration, claiming the supremacy for the second, understood not as superficiality but – in Mendini’s own words – as “cult of the surface, on which is inscribed, through decoration, a richness of visual narration that offsets the dullness of the function.”

As the exhibition curator Aldo Colonetti puts it, the maquettes are not just project tools, but also “autonomous expressive works, they look as they were abruptly parachuted in the museum’s space with their unexpected strength.” First presented the Triennale di Milano in 2018, at the Museo Nivola they relate to the simple and essential architecture of the exhibition space – once the public wash house of the village. “There – goes on Colonetti – it is exactly in this capacity of being themselves and, at the same time, of listening to the interpreters, i.e. we the citizens destined to inhabit the architectures all over the world, that the project identity of Francesco and Alessandro shows; on one side they reduce the complexity of the possible forms to a series of compositional languages harking back to Galilean models, with a preference for geometrical figures and mathematical relations; on the other side both of them – especially Alessandro, but in complete agreement with Francesco – are aware of the fact that color is not a subjective variable: it is a structural and substantial part of the world.”

The exhibition layout by Alessandro Floris focuses on color – the lively and light range of Mendinian chromaticism – to put the exceptional plastic creations of the Atelier in relation with the museum’s space and the Mediterranean light that floods it.

In front of the exhibition hall, on the panoramic terrace of the Museo Nivola, a Mendinian open air living room awaits the visitors: the iconic Proust armchairs form a corner for socializing, resting and conversation. It is a homage, made possible by the collaboration with Magis, to Alessandro Mendini’s idea that “the museum should be institutional but not paternalistic, should be gentle and hospitable as a private home”.

Alessandro Mendini (1931-2019), architect, artist, designer, theorist and journalist, was born in Milan. After graduating in 1959, he started his career in Marcello Nizzoli’s studio. In 1970 he left architectural planning to devote himself to architecture and design journalism: he directed Casabella, Modo and Domus, magazines through which he spread his ideas of transforming the world of the project. Together with Andrea Branzi and Ettore Sottsass, taking part in Global Tools and Radical Design, he was the main theorist and promoter of the renewal of Italian design during the Seventies.
In 1979 he joined Studio Alchimia, the radical design group that during the Eighties, alongside with Memphis, revolutioned the functionalist design, acting at the borders between art and design, hinting at pop culture and Kitsch. With Alchimia Mendini created objects, furniture, environments, paintings, installations, architectures. Among the most significant works of this period are the Groningener Museum and the reinvention of the corporate image of Alessi, for which he was artistic director.

Francesco Mendini, architect, was born in Milan in 1939. He started his activity at Nizzoli Associates with architectural projects such as the new quarters, offices and social center for the Italsider in Taranto and other building complexes in Europe and North Africa. During the Seventies he also focused on engineering and constructions and he was advisor for several research institutes and for the Italian CNR. Within the Atelier he is responsible especially for architecture and the layout of interior spaces and exhibitions.

In 1989 Alessandro and Francesco Mendini opened Atelier Mendini in Milan. The atelier designed Alessi’s factories and offices and the company’s Museo del Casalingo in Omegna; the Olympic swimming pool in Trieste; the renovation of the Villa Comunale and the stations Salvator Rosa, Materdei and Università of the underground in Naples; the offices of Trend Group in Vicenza; the conversion of an ex industrial site in a commercial and residential area in Milan Bovisa; the tower of Paradise in Hiroshima, the Groningener Museum in Holland, a neighborhood in Lugano; the Madsack building in Hannover and a commercial building in Lörrach, Germany. In South Korea the building of the Triennale di Milano in Incheon, now the flag building of a national broadcasting company, the Posco residential buildings in Seoul, the Observatory tower in Suncheon and the high speed trains terminal in Gwangiu. Atelier Mendini received the Gold Medal fo Italian Architecture in 2003 at the Triennale di Milano for the underground stations in Naples and the Villegiature Awards 2006 in Paris for the Byblos Art Hotel di Verona, named “Best Hotel Architecture and Interior Design in Europe”.