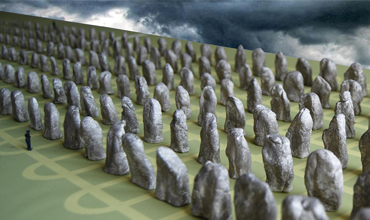 The Nivola Museum is proud to announce the first exhibition in Sardinia of Andrea Branzi. The exhibition inaugurates the 2016 museum program devoted to the exploration of the relationship among, art, handicraft and design: an intertwinement which is paramount in Nivola’s work as well as in Branzi’s artistic research. The show comprises many recently designed objects, projects, and videos, with a few works from earlier periods, under the rubric of “metropoli primitiva” (The Primitive Metropolis), a vision of the present urban situation, in which the new cognitive capacity of humanity transcends certain physical and cultural traditions to offer primordial freedom. Over the past three decades Branzi has regularly exhibited graphic works, models of imaginary environments, and furniture that have distinguished him as the most original thinker in the world of design, someone from whom the public anxiously awaits the next “Branzi”.

Although he never encountered Costantino Nivola, he feels a sincere connection to the Sardinian artist’s themes, in particular the use of great monoliths, which enter Branzi’s works as scale models that recall Nivola’s installation of the great stones of Piazza Satta in Nuoro. One of the works on display, Sasso (a basalt stone turned into a box, showing the typical connection between natural and artificial in Branzi’s work) has been produced in Orani, in confirmation of the Museum’s commitment in enhancing the extraordinary local craftsmanship, once again directly involved in the production of the exhibition.

La metropoli primitiva displays numerous sculptural objects used as vases and made from unlikely materials, such as plasticine, wood, stone, bronze, and Plexiglas. The imagery of bodies without heads, chairs made partly of logs, and objects placed in boxes surrounded by mirrors that provide infinite reflections both shock and comfort the visitor as familiar things made strange.

The artist will offer a lecture on La metropoli primitiva in Sassari at the Fondazione Banco di Sardegna at 17:30 pm and will be present at the opening on Sunday March 6th at 11:30 am.

Andrea Branzi, one of the world’s most famous architects, has never built a building. Instead he has proposed visions of cities and designed an infinite number of objects to inhabit interiors or to be set into urban spaces.

In his earliest efforts during the 1960s in Florence as the chief ideologue of the radical group of Archizoom he campaigned for an approach to architecture and urbanism that would correspond to the non-figurative work of artists such as Jackson Pollock and Alberto Burri. From this initial liberatory vision in the projects for No-Stop City he moved to Milan, where as an independent designer he became a key member of the movement for New Italian Design, exhibited at the Museum of Modern Art in New York.

During the 1980s he co-founded the Domus Academy and taught at the Politecnico di Milano where he exerted a profound influence on several generations of designers. Over the years he has established his own realm of poetic responses to design, combining unprocessed pieces of nature, such as branches and tree trunks with refined industrial joinery for the series Animali Domestici. Fascinated with the contrast of industrial processes and natural products, he has invented some of the most imaginative and sculptural objects for flower vases, seen in the series Corpi. Among the antithetical materials introduced for the ephemeral function of vases he has experimented with the heaviest bronzes and the lightest plexiglass. In more recent years, inspired by the sense of erasure and reversion to origins in the paintings of Francis Bacon, Andrea Branzi has created a series of cases for Dolmens, models containing a synthesis of contemporary high technology with primordial existence. Recognizing the impact of artificial intelligence on urban culture, he anticipates a return to a “primitive metropolis”, one of renewed physicality represented by the strenuous itineraries of the participants of Parkours, and proposes in his model of Carnac, a fantasy of lines of monolithic stones that evoke the archaeological original, a place where time, be it minutes or thousands of years, becomes insignificant.

Andrea Branzi is the author of numerous books on design, in particular Il Design Italiano 1964-2000 (Electa, 2000), as well as many philosophical reflections on urbanism, such as Modernità debole e diffusa. Il mondo del progetto all’inizio del XXI secolo (Skira, 2006). He has also published many fantasies, such as Genetic Tales (Edizioni ALessi, 1998). He exhibits regularly in Milan, Rome, Paris, and Tokyo, and his works have been acquired for the permanent collections of Centre Pompidou in Paris, the MoMA in New York, the Victoria and Albert Museum in London, the Vitra Design Museum in Weil-am-Rhein, and the CSAC in Parma.