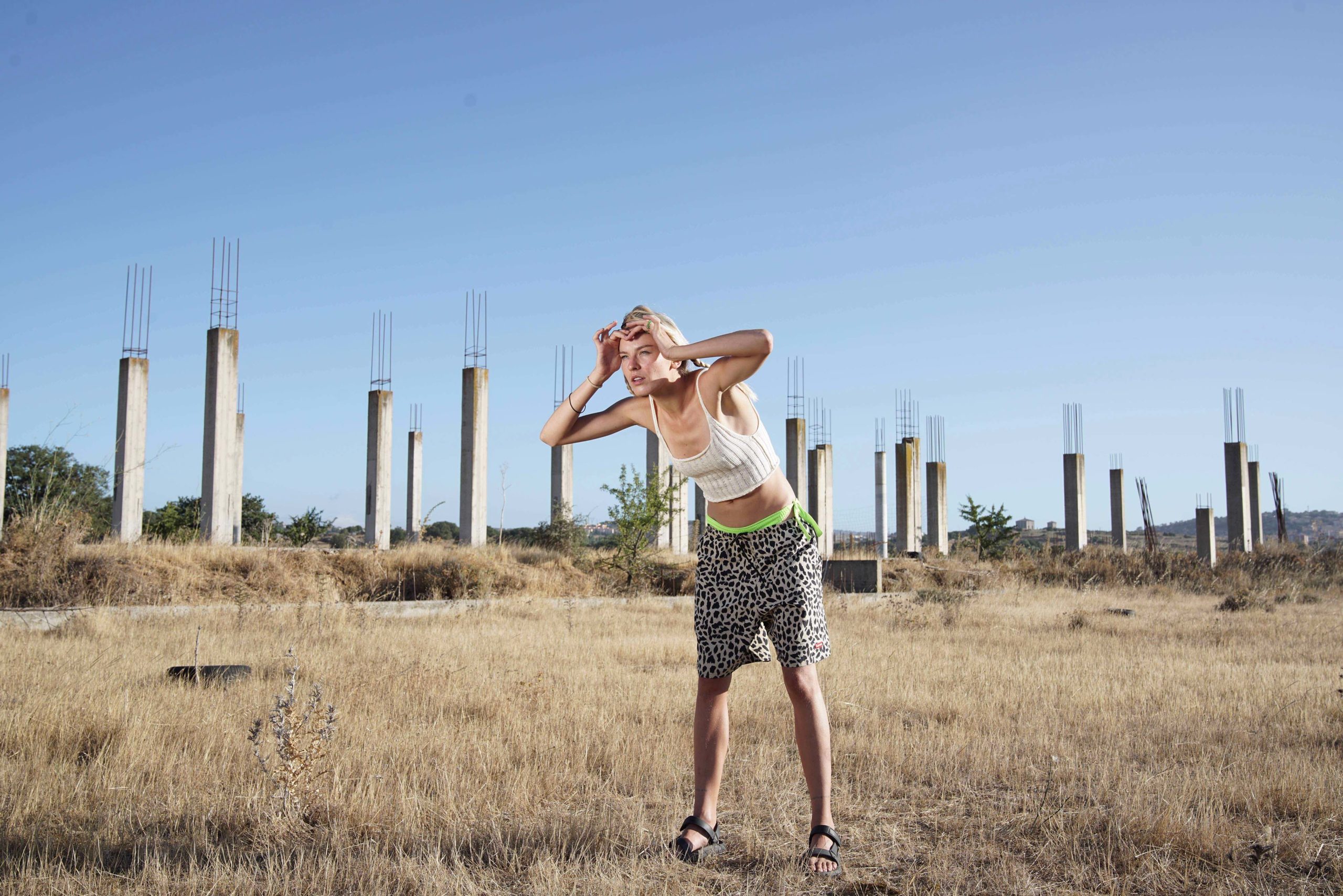 Museo Nivola is delighted to present the exhibition Notes for an Unfinished Park, the latest project by Alterazioni Video.

The collective Alterazioni Video has been working on Unfinished since 2006. The first phase of the project focused on the mapping and geolocation of 696 unfinished buildings scattered throughout Italy, architectural structures begun but never completed and financed with public funds.

Unfinished is now entering its second phase, concentrated on repurposing the uncompleted buildings. Left structurally unchanged as monuments to the present, the idea is to transform them into multifunction sites for outdoor cultural and athletic activities, like parks, gardens, auditoriums, and theaters.

The exhibition at the Nivola Museum is devoted to the Palasport (indoor stadium) of Nuoro, a striking ruin lost in the countryside, just outside the city. Begun at the end of the 1990s and contracted out in 2012, it was definitively shelved in 2017: what remains is a forest of cropped reinforced concrete pillars, a colossal entrance and a barren foundation surrounded by piles of detritus and wild vegetation.

Alterazioni Video wants to turn this failure into a positive, transforming the abandoned work site into a park. It is inviting us to “kiss the frog” and reappropriate the awkward, neglected ruin, accepting and making it useful.

The collective celebrates the unfinished building in a film (the core of the exhibition at the Nivola Museum) that develops on two parallel narrative planes: that of the encounter between the characters within the – at times surreal and magical – cinematographic fiction, where times seems to stand still, and that of the filming of these encounters on the theater set, which tells of a reality and a present in a state of becoming.

Various characters move through the unfinished stadium: a visionary campsite guard who has discovered how to travel through space-time, a young TikToker lost among the ruins, two vacationing American musicians, and a dowser surveyor, along with various extras (young locals, a shepherd, the police). Each character embodies some of the features described by Alterazioni Video in the Manifesto of the Unfinished: beauty and terribleness (the TikToker and the guard), the awkward, corrupt past that falls off the straight and narrow (the dowser surveyor), the audience that, like the chorus in ancient Greek tragedies, becomes an active part of the process of transforming the site (the vacationing musicians, who play music among the ruins) and the local community (the young people from the café).

The entrance to the stadium, the only covered space at the site, which the characters step through to travel through space-time, becomes a multidimensional threshold that connects the various unfinished buildings scattered throughout Italy to each another, as if a single vast archaeological park of the unfinished, the expression of the visionary and magical thinking of the designers.

In this film, Alterazioni Video talks about the unfinished through a new interpretive lens. The phenomenon is explored in all of its complexity through a plurality of registers, from the epic (the heroic gesture of beauty against the beast) to the fairy tale (the stadium wants to become a park, like the puppet aspires to become a real boy) and the documentary (The Making of Palasport Nuovo).

The cinematographic language mixes the classics (Shakespeare’s Tempest, with the stadium as the island and the guard as Caliban), Pasolini’s tragicomedy in the vein of La Ricotta (the two narrative planes – the fictional story and the shooting on the real set – as well as the TikToker who eats the guard’s leftovers), and YouTube realism meeting the stereotypes of the spaghetti western and science fiction.

The sounds made by the iron in the stadium’s cement framework form the film’s soundtrack, produced in collaboration with Travis McCoy Fuller, Rudi Fischerlehner and Roberto Follesa.

The project at the Nivola Museum is accompanied by an installation created by Alterazioni Video at the Olbia airport, on view in the arrivals area until February 2022.

Alterazioni Video (Paololuca Barbieri Marchi, Alberto Caffarelli, Matteo Erenbourg, Andrea Masu, and Giacomo Porfiri) is an international artists collective that was founded in Milan in 2004 and creates short and feature-length films, video art, installations, performance and, recently, NFT. The group is interested in disinformation and the relationship between truth and representation, legality and illegality, freedom and censorship, in a vision of art deeply intertwined with political activism. Its work was presented at the 52th Venice Biennale, the 4th Prague Biennale, and Manifesta 7, and has been shown at galleries and institutions worldwide.

Museo Nivola in Orani (Nuoro), located in the middle of a park in the heart of Sardinia, is devoted to the work of Costantino Nivola (Orani, 1911 – East Hampton, 1988), an important figure in the international movement for the “synthesis of the arts” (the integration of the visual arts and architecture) and active in the context of cultural exchange between Italy and the United States in the second half of the 20th century. The museum has a permanent collection comprising more than 300 sculptures, paintings, and drawings by Nivola and organizes temporary exhibitions focused primarily on the relationship between art, architecture, and landscape.